Saints related to Patron of Soldiers 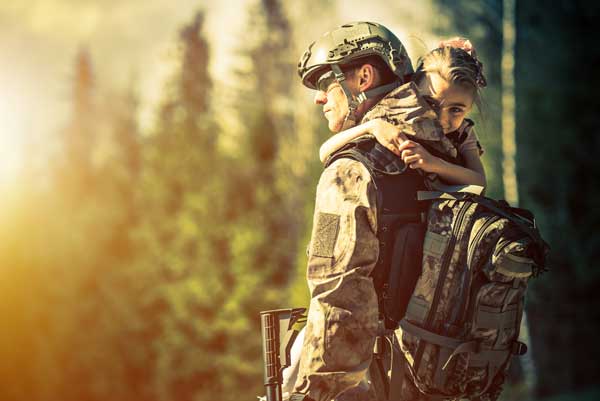 There are a significant number of patron saints for soldiers, but the primary Patron of Soldiers is St. Michael the Archangel, the defender of heaven. Of the remaining merely mortal patron saints of those in the armed services, most served in the military of their time period. This list includes general patrons of soldiers, but there are also separate patrons for certain particular branches & services.

St. Joan of Arc – Like many young people, Joan had a calling to serve in the military. In her case it began at 16 when heavenly voices (one of them St Michael) told her God wanted her to save France. Thus began the story where a 17 year old peasant girl would lead armies and restore a king to his throne. Captured, imprisoned and later executed because she would not disobey God, Joan is a model of determination and strength. [view St Joan of Arc Items] 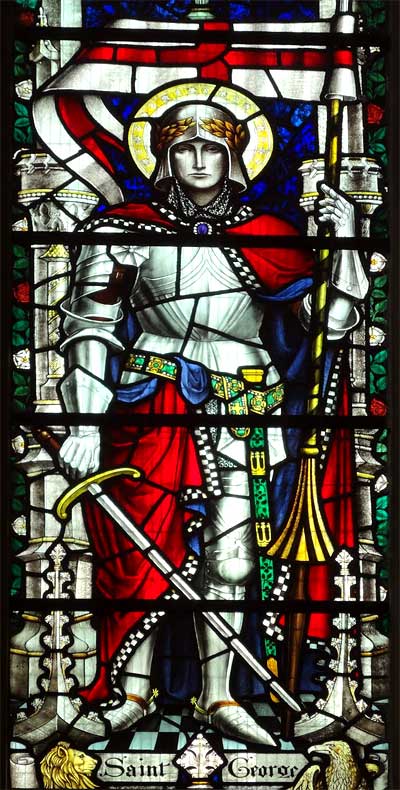 Other Patrons of Soldiers

St Adrian of Nicomedia – A Roman military officer at a time in the fourth century when Christians were persecuted, Adrian witnessed their words of faith, courage and willingness to die for Jesus. Their faith so moved him that he converted to Christianity and refused to persecute the Christians any longer. He was brought before the court, tortured and martyred. [view St Adrian Items]

St. Ignatius of Loyola – Ignatius began as a page at the royal court followed by time as a soldier in the Spanish army. When fighting in France, a cannonball hit him in the leg, partially crippling him. While recovering from injury, Ignatius began a new journey in life, this one a spiritual journey. After a time of austere living, study and visions, he wrote his “Spiritual Exercises” and later founded the Jesuit order. [view St Ignatius of Loyola Items]

St. George – A soldier under the Roman Emperor Diocletian, George found favor for his bravery even though Diocletian was a pagan bitterly opposed to Christianity. Courageously standing up for persecuted Christians led to his arrest in an army purge. He went from a favorite of the emperor to an outcast. Tortured, George declared his love for God as he was martyred. The patron of England St. George is often shown slaying a dragon, much the same way as St Michael is portrayed.[view St George Items]

St. Martin of Tours – The son of a roman military veteran, Martin too enlisted in the army. though a convert to the Christian faith he served his duty until a time when he changed allegiance from his current superior, an anti-christian man to Christ. He declared “I am a soldier of Christ: it is not lawful for me to fight.” He acted with devotion not cowardice and offered to stand at the front of the troops unarmed for the battle that was to come. But, before it began, the adversaries sued for peace. He was released from the service. Martin’s vocation lead him to travel, preach and convert, eventually even becoming a bishop. [view St Martin of Tours Items]

St Sebastian – Sebastian lived a double life. A secret Christian and the captain of the Praetorian Guard during the reign of emperor Diocletian, he secretly brought supplies to persecuted Christians. A man of great faith, he was known to have brought Christianity to fellow members of the guard. Eventually discovered, Diocletian had St. Sebastian tied to a tree and shot, but the arrows that pierced his strong body failed to kill him. Once healed he spoke to Diocletian from a secret passage condemning his cruelty and preaching to him about becoming Christian. An enraged emperor ordered Sebastian found and killed for certain this time. He was clubbed to death and his corpse dumped into a sewer. [view St Sebastian Items]

Patrons of Soldiers In a Round-a-bout Way

St. James the Greater – He and his brother John were Apostles of Jesus. James preached the Gospel in Spain following the resurrection helping to spread Christianity there before he died a martyrs death by the sword of King Herod Agrippa. Primarily known as the Patron of Laborers and Lost Souls, his (abiet loose) connection to soldiers comes from accounts of a fictional battle (Battle of Clavijo) in the 9th century where St James miraculously appeared and led the outnumbered Christian army to victory. [view St. James Items]

St. Louis – The only French monarch to be named a saint, St Louise was deeply religious, a trait he learned from his mother and also found in his wife Margaret. A patron of the arts and a devout Catholic, Louis iX had a love of the Church, was merciful and was renowned for his charity. His connection to soldiers is largely due to his participation in two crusades. He died in Carthage during his second crusade. [view St Louis Items]

St Barbara – Emperor Diocletian’s persecution of Christians created many patrons of soldiers. St. Barbara is in their company. According to her legend, St. Barbara secretly became a Christian. When her father discovered this, he dragged her before a judge, where she was condemned and tortured. Her enraged father then personally beheaded her. On his way home from the execution, he was struck by lightning and his body incinerated, leaving behind only his sword. From this strike from above she has been embraced as the Patron of Artillerymen [view St. Barbara Items]

You can learn more about the life stories of each saint by clicking on their tile below. 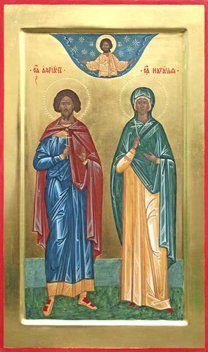 St. Adrian was a pagan and a Roman officer during the Diocletian persecution. Witnessing the heroic courage of the Christian martyrs, and moved by their confession, St. Adrian declared himself to … 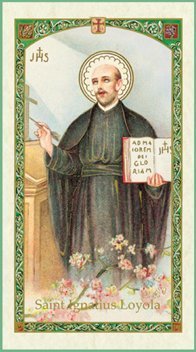 Well-known as the founder of the Jesuit order, St. Ignatius of Loyola was born in Spain in 1491. Recovering from an injury from battle, Ignatius experienced a conversion and spent years in prayer a… 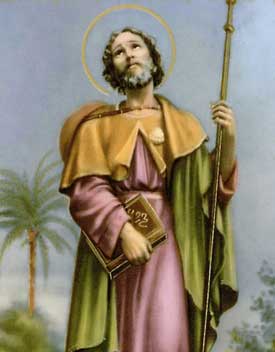 St. James the Greater was one of the original twelve apostles. The son of Zebedee, he is often referred to as “the Greater” as a way of distinguishing him from the apostle James, brother of Jud… 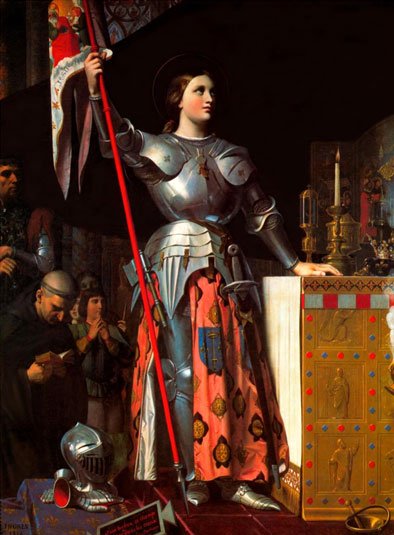 When St. Joan of Arc was 16, heavenly voices revealed to her that God wanted her to save France. She courageously led French forces to a number of victories over the English in the Hundred Years W… 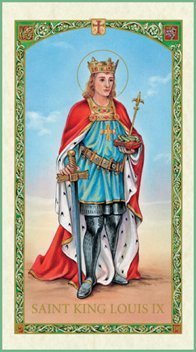 Saint Louis was born in 1214 to King Louis VII and the saintly Queen Blanche. Greatly influenced by his mother, he was considered pious even from his youth. At age 22, he ascended to the throne a… 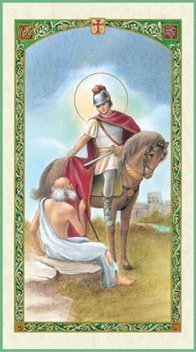 St. Martin of Tours was born a pagan in 316. During his time in the Roman army, he saw an old man shivering in the cold and gave the old man half his cloak. He converted to Christianity after seein… 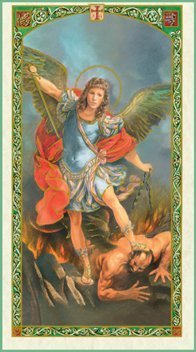 St. Michael is one of the best loved of all saints in the Catholic tradition because of his strength and dedication to God. Many people make a daily practice of praying the “Saint Michael Prayer,… 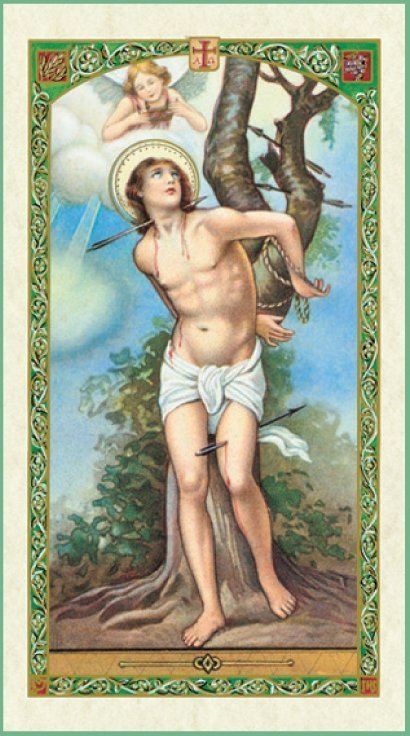