Little is known about the life of St. Agatha; however, due to the torture and martyrdom she suffered for her Christian faith, she has been venerated as a saint since at least the 6th century. A Patron Saint for nurses, Agatha was recently named the patron saint of those battling breast cancer. Her willingness to sacrifice, strength of faith and tenacity to the will of God makes St. Agatha a beautiful and encouraging example for anyone touched by the anguish of fighting this diagnosis. 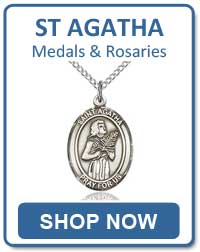 St. Agatha was from Catania, Sicily. Though her birth date is unknown, it is believed she died around 251 AD. According to legend, St. Agatha was born to a wealthy and powerful family in Sicily. As a young woman she refused any offers of marriage. She wanted to live the life of a virgin, consecrated to God. A young man, named Quintian, felt as though his high ranking would persuade St. Agatha to give in and marry him. When she refused him, he had her arrested and brought before the judge, who was Quintian himself. He threatened her with the sentence of torture and possibly death, thinking that this would make her give in to him. Her response was a prayer to God: “Jesus Christ, Lord of all, you see my heart, you know my desires. Possess all that I am. I am your sheep: make me worthy to overcome the devil.”

Quintian decided her punishment would be to be sent to a brothel in order to get her to change her mind. After a month of being assaulted and humiliated in the brothel, St. Agatha was brought before Quintian again. He sent her to prison this time, hoping that would terrify her more than the brothel. St. Agatha continued to profess her faith in Jesus, so Quintian had her tortured. When she was refused medical treatment to nurse the wounds she had gotten from the torture, she was visited by a vision of St. Peter who had come to care for her. He healed her wounds completely, and the prison guards were frightened by the magnificent light glowing from her cell while he was with her. Again, St. Agatha was tortured, having her breasts cut off. After being tortured a final time, St. Agatha said her last prayer: “Lord, my Creator, you have always protected me from the cradle; you have taken me from the love of the world and given me the patience to suffer. Receive my soul.” Following this prayer, St. Agatha died. 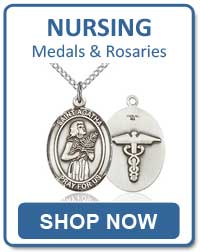 St. Agatha was buried in an underground basilica. During the 4th or 5th century this basilica was enlarged and embellished, and became known as the Abbey of St. Agatha, in Catania. In the 11th century, her body was discovered to be incorruptible. Parts of her body still exist today.

Early depictions of St. Agatha showed her holding a plate on which lie her severed breasts. It is said that people were mistaken and thought the plate contained loaves of bread which St. Agatha had been holding at the time of her death. Due to this belief, the tradition of blessing loaves of bread on the feast of St. Agatha began, and continues to this day.

St. Agatha is one of seven women, including the Blessed Virgin Mary, who is commemorated in the Canon of the Mass.

St Agatha with Nurse Back Medal – Sterling Silver with 18 in. Stainless Chain 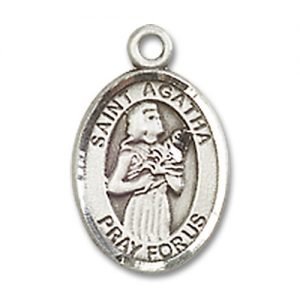 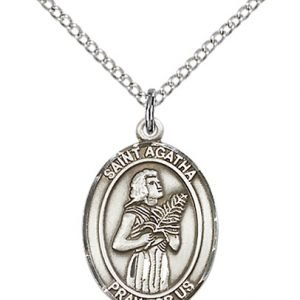 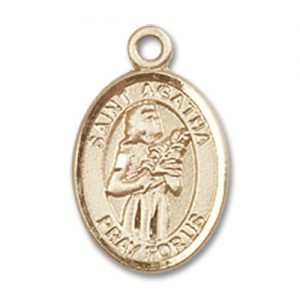 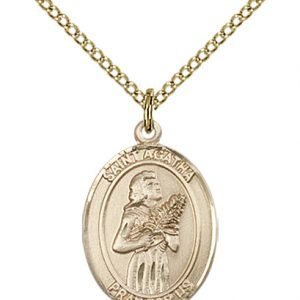 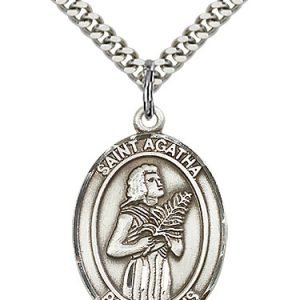 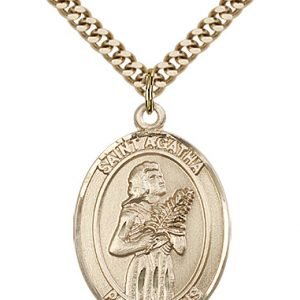 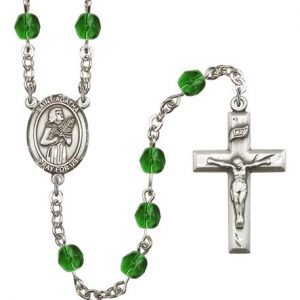 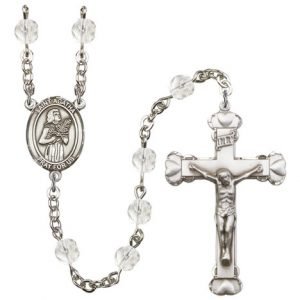 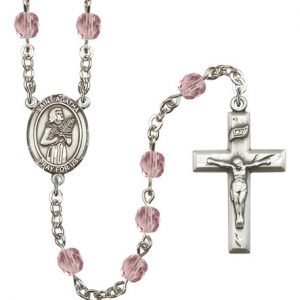 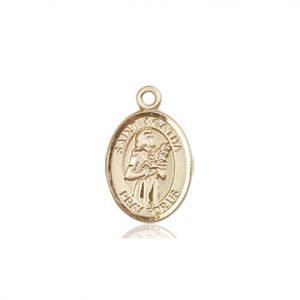 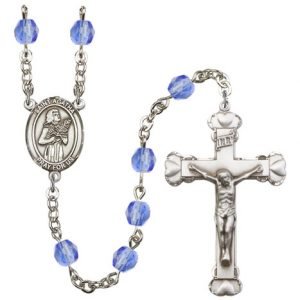 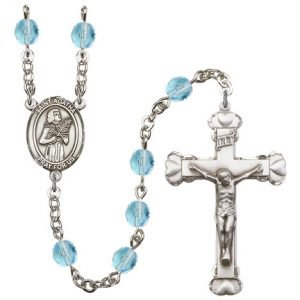 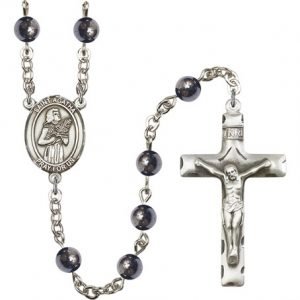 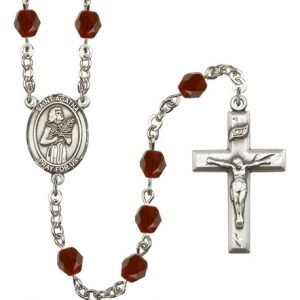 St. Agatha is the patron saint of those with breast cancer, fire prevention, nurses, rape and sexual assault victims, and against natural disasters and volcanic eruptions. She is patron of those with breast cancer due to the manner in which she was tortured, having her breasts cut off. St. Agatha is also the patron saint of rape and sexual assault victims because of another method of torture which was used on her, where she was forced to live in a brothel and be humiliated through the violent acts that took place there. She is the patron saint of nurses because of her vision of St. Peter coming to her aid and nursing the wounds she received from being tortured. She became the patron saint of fire prevention and against natural disasters and volcanic eruptions when she was invoked to prevent Mt. Etna from erupting, and the volcano settled. 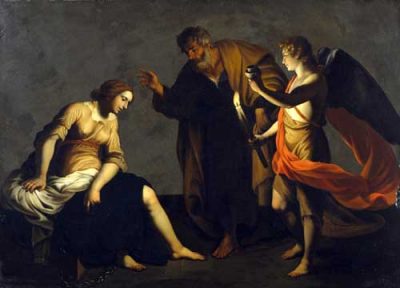 St. Agatha is depicted in art with symbols that represent the torture she underwent, showing her dedication to her faith in Jesus Christ. Among these symbols are embers, a knife, shears, and tongs. She usually is shown wearing a crown of flowers or holding a palm branch to symbolize her purity. Many times she is holding a plate on which lie her breasts, a representation of the horrible torture she experienced, which has earned her the title of patron saint of breast cancer patients.

Let Saint Agatha be your partner in prayer as you say one of the prayers below or as part of your rosary devotion. Find Saint Agatha Rosary Beads here. 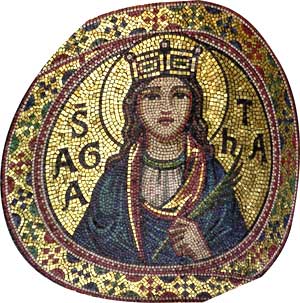 Dear Virgin and Martyr, whom the Church recalls in her liturgy, you heroically resisted the temptations of a degenerate ruler. Subjected to long and horrible tortures, you remained faithful to your heavenly Spouse. Saint Peter, we are told, gave you some solace and so you are invoked by nurses. Encourage them to see Christ in the sick and to render true service to them. Amen.

Lord God, you showered heavenly gifts on the virgin Agatha.

Hear the prayers of those who recall her devoted life and who ask her to intercede for them in their necessity.

Help us to imitate her virtue during our earthly life and enjoy eternal happiness with her in heaven.

One thought on “St. Agatha”