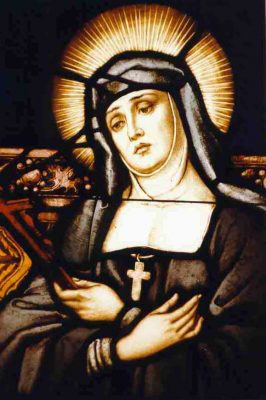 St. Jane was born in Dijon France in 1572. Her mother died when she was 18 months old and her father saw to her education. Her marriage into a noble family at age 21 made her a well-known social figure of the time. As a wife and mother, she was very devoted to her family. She also had great compassion for the poor and is said to have always welcomed them into her home when they needed food.

Jane became a widow with the care of four children when her beloved husband was killed while out shooting. At the death of her husband, St. Jane de Chantal, was broken-hearted, and would not forgive the individual responsible for her husbands accidental death. She had a change of heart after hearing the holy bishop, St. Francis de Sales preach on the love of God. De Sales became a friend and later her spiritual director. Together with his support and the support of her father and brother, she founded the Congregation of the Visitation and established several convents throughout France.

She was canonized in 1767 and her feast day has been moved several time beginning with August 21, then December 12, and finally August 12 where it remains